The following are stories collected during the 2016 Love Xubuntu campaign.

The conversation is between me and one of my University mates. We are both Xubuntu users and also programmers.

We are Italian and so the screen is in Italian, sorry for the inconvenience. But I'm going to tell you the story and translate the messages in the screen.

Here in Italy now it's exams-time. We, as programmers, were also working on two different projects, and were talking about them.

He (white): -sends a photo in which shows that his project's folder is locked-

He: “I had to change folder's user and give it to root; and then revoke permissions to myself” (he did this to remain focused on studying for the exams) 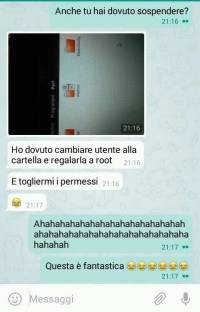 My mother in law is 81. She's half deaf and her eyesight is getting worse and worse. She couldn't properly use her old Windows XP computer anymore. So, I took Xubuntu, stripped it down to the bear necessities for her (mail, internet, solitaire), and one task bar button (shutdown), and made the icons and font as large as is possible and still usable, and tried to make it look like her XP-theme. I even found that it was possible to make the scroll bar in the windows really wide.

She's now a happy xubuntu user. She likes the large font, the large icons and the clear colours.

I live in Israel, and in Hebrew, the slang word “Zubi” is an insolent and extreme way to say “No way I'll do it”.

Also, according to the Hebrew Wikipedia, Xubuntu is pronounced as “Zoo-boon-too” rather than “Ksoo-boon-too” (its name is written in Hebrew, which solves that ambiguity).

Therefore, when I told a friend that my old computer would not boot because of a hard disk problem, and all the technicians advised me to buy a new one, but I installed Xubuntu and it works, he noted that “Xubuntu” actually sounds like “I'm not doing that, I'm moving to Linux!”

Reminded me of a modern version of my beloved Workbench 1.3 on my Amiga 500 which unfortunately doesn't work anymore. The blue wallpaper, the taskbar on top and the icon appearing on my desktop when inserting a SD card, loved it.

Seriously, that was my first thought when I installed Xubuntu for the first time yesterday.

With this in mind, Carl made an adjustment to the Xubuntu desktop and replaced the Xubuntu mouse logo with the Amiga Boing Ball!

I started my computing days in 1986 with my first computer, an Apple IIe. From there I went on to use an IBM XT system with DOS. Then later I used GeoWorks Ensemble and then Windows 3.1 through Windows XP. From 2004 to 2015 I used a Mac and Apple's OS X. I use Windows 7 but only for work on my employer's laptop.

In 2015 I sold my MacBook Pro and built my own PC (something I had done in the past but had not done in many years). I decided I was switching to Linux. I tried various distros but ended up sticking with Xubuntu. It has allowed me the customization that I could not get from Apple - you take what they give you and that's it. I was tired of the direction they were going with their OS and wanted control of my system back. That's why I chose Xubuntu as it gave me the most control over the look and feel of the operating system. And I can change that look as often as I want.

I am thankful for the talented developers and other contributors that keep Xubuntu going. Thanks for all you do!

I started my Linux journey about 12 years ago by using Ubuntu and used Ubuntu for quite a while until I came across a variant called Xubuntu and I immediately fell for this distro. I have created many awesome moments with Xubuntu it gets out of my way and lets me get all my everyday tasks done and done right. I follow Xubuntu and some of its team members just so I can keep up to date with all that is new and upcoming. I run a computer business and I always recommend Xubuntu to all of my customers no matter if they have super extreme hardware, I always tell them that it is the operating system that just lets you get things done.

I have installed Xubuntu on all my computers at home and I love it, I always get a chuckle when my wife is running her computer and it runs MS Windows and it seems to nag her about everything, and my systems do not they just let me do what I want when I want.

So I thank all of you for your hard work, hope to see what great things you all come up with in the future.

We run a small business, mainly doing computer service and maintenance, app programming and other similar things. One of the things we do are customized Linux desktops, where we build a user interface based around a customers wishes; tweaking everything from themes, colors and fonts to panels, widgets and other content. When we started doing this we tried out and evaluated loads of distributions and desktop environments, eventually deciding that Xubuntu was the perfect choice. We wanted to maximize the amount of customization we could do while still having a system that was light on resources (since customers often have old computers.)

It was a choice we have never regretted, as it has always fit our needs perfectly. We can get everything from design to workflow just as we want it, and it is stable as rock while still often introducing new features for us to play with.

One of our best experiences was with a person who wanted an interface on a laptop that was just as simple and scaled down as that of an iPad, while still being able to do all things a computer ought to do. This was not an especially computer-savvy person, so it needed to be straightforward and simple. We managed to discard most classic desktop parameters and build a very unique interface, all within what was provided by stock Xubuntu. (Though we did some art ourselves.) It turned out great, our customer was very happy with it and other people have shown interest in having something similar on their computers. Needless to say, this was a success story for us which had not been possible without Xubuntu.

So thanks for all your hard work! We keep on designing our users desktops and will continue to use the excellent Xubuntu for it. :)

After seeing a simple metal cookie cutter created by the Xubuntu Marketing lead, Keith was inspired to make a plastic 3D-printed version of the Xubuntu cookie cutter. He printed several of them and also shared the design on Thingiverse so others could also print it. 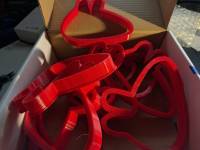 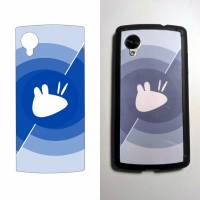 I converted another one! #LoveXubuntu @Xubuntu

RT: Jordan Zimmerman @jzestaaqui
my (windows 10 smh) computer went kaput, and I went through a crazy journey for a day to get Linux - thanks @aaronraimist and @SwagBelgian

Im in #LoveXubuntu for two years now! Use it as my only OS on my T420. it works beautifully and i think it will do that a while longer :)

Happy 10th birthday for my favourite #Linux distro! Here's a screenshot of my #Xubuntu 16.04 setup #LoveXubuntu 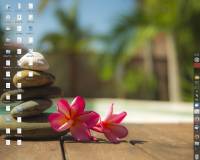 I #LoveXubuntu because it's top-notch, minimalistic neat and helps me focus on real things.

Happy 10th Anniversary to @Xubuntu A look at my system - #Xubuntu 16.04 with Plank dock, Arc-Theme #LoveXubuntu

#LoveXubuntu! I wrote PhD Thesis in Portugal and now PostDoc at @UniBarcelona also using @Xubuntu. Almost 10 years with u! Keep on fellows!!

In 2007 I've polished my XFCE, slick grey theme, minimalistic icons, gmusicbrowser. Then #Xubuntu came out and #LoveXubuntu from first sight

Upgrading to #xubuntu 16.04. Thank you Wily Werewolf, you have served me well. #LoveXubuntu

Loving @Xubuntu since 12.04. The perfect distro for getting work done. Fast and stable, I've finished mi PhD with you. #LoveXubuntu

@Xubuntu A teacher once asked me, “how did you get windows to look like that” , to which I replied it's xubuntu sir #LoveXubuntu

Fresh installed and ready for the next two years! @Xubuntu 16.04 - #LoveXubuntu

I have been using Xubuntu on 3+ home computers for over 8 years. From time to time I explore elsewhere, but always come back. #LoveXubuntu

Thank you for being there <3 #LoveXubuntu #Xubuntu #Linux #Desktop

#LoveXubuntu You all rock with this rock solid Distro